İt is April, just in time for the Tulip Festival.  I love this month for so many reasons and one of those is the Tulip festival.  İt is amaizing to see İstanbul's gardens covered with tulips specially the parks.  That is why today we are going to visit Emirgan Woods,  the garden which is the centre of Tulip festival and where you can see around 120 different kinds of tulips. İt is one of  the must delightful places in Istanbul! 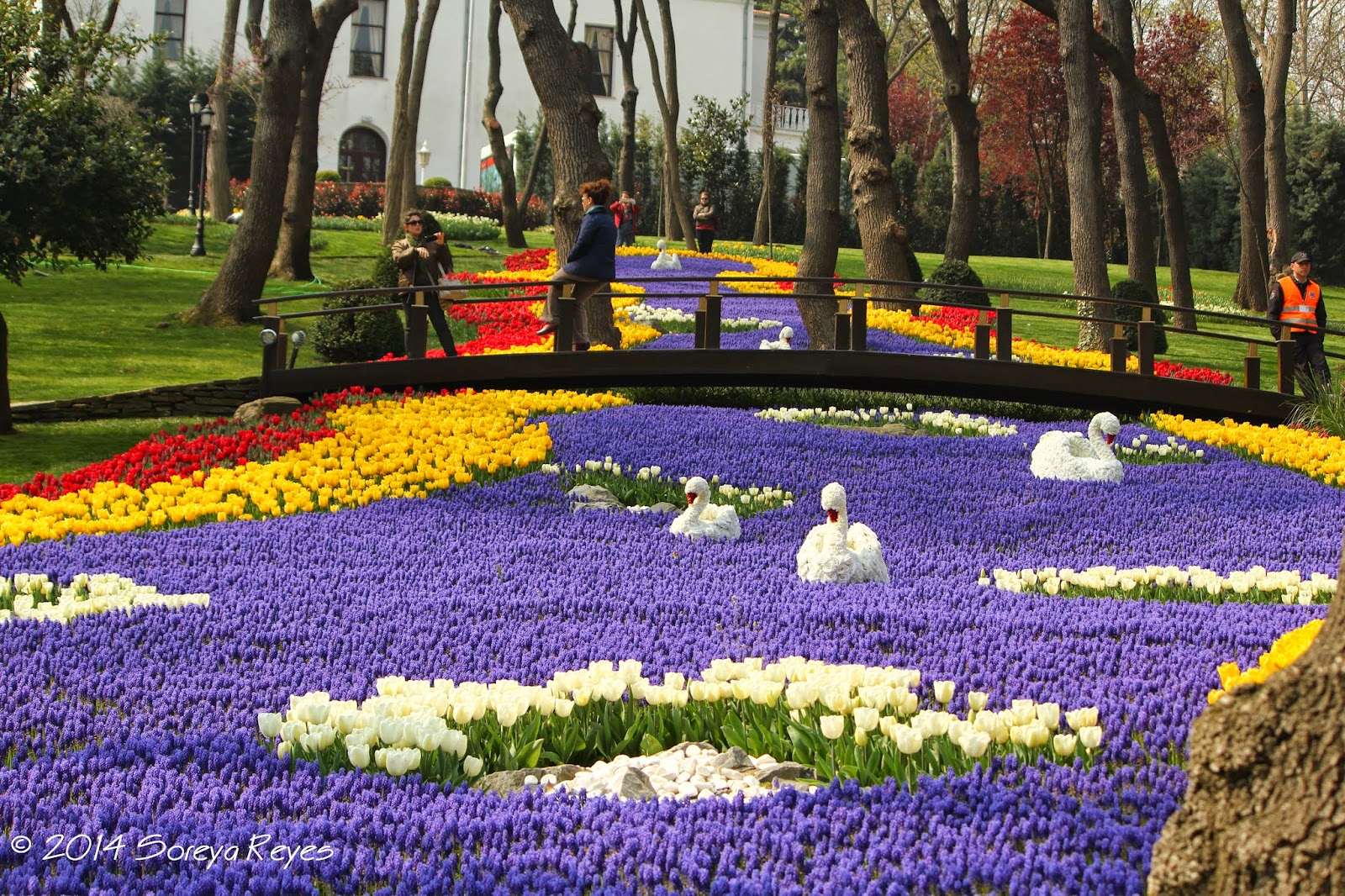 Emirgan Woods is located between Besiktas and Sariyer and in Emirgan neighbourhood. To get there you can take the bus 25E bus from Kabataş or Beşiktaş and ride along Bosphorus. It has amazing overlooking Bosphorus view along the coast of Sariyer. 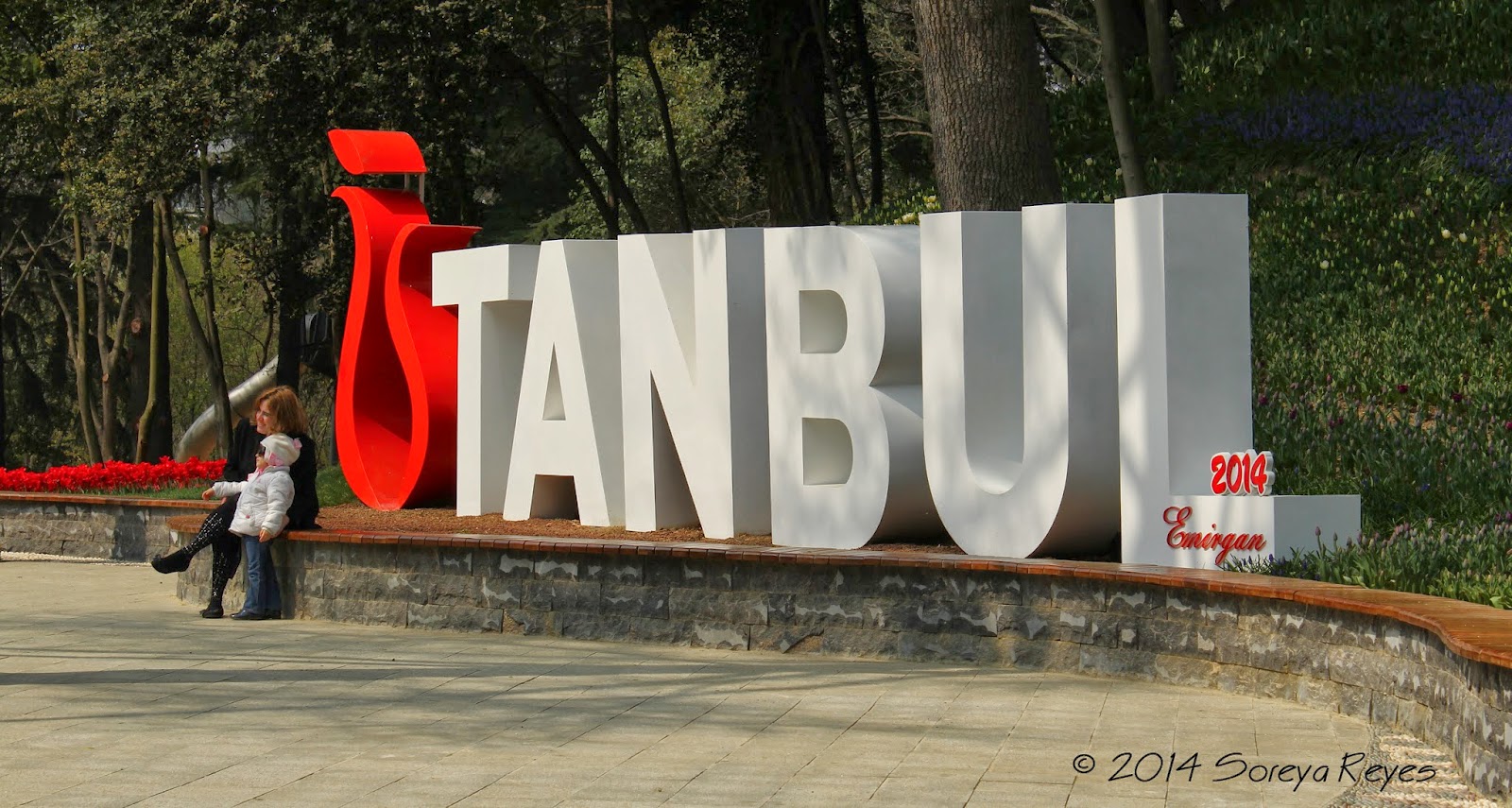 There is no entrance fee for pedestrians and for cars you pay a 5 TL car park fee. You might also park your car outside the park on one of the public streets. 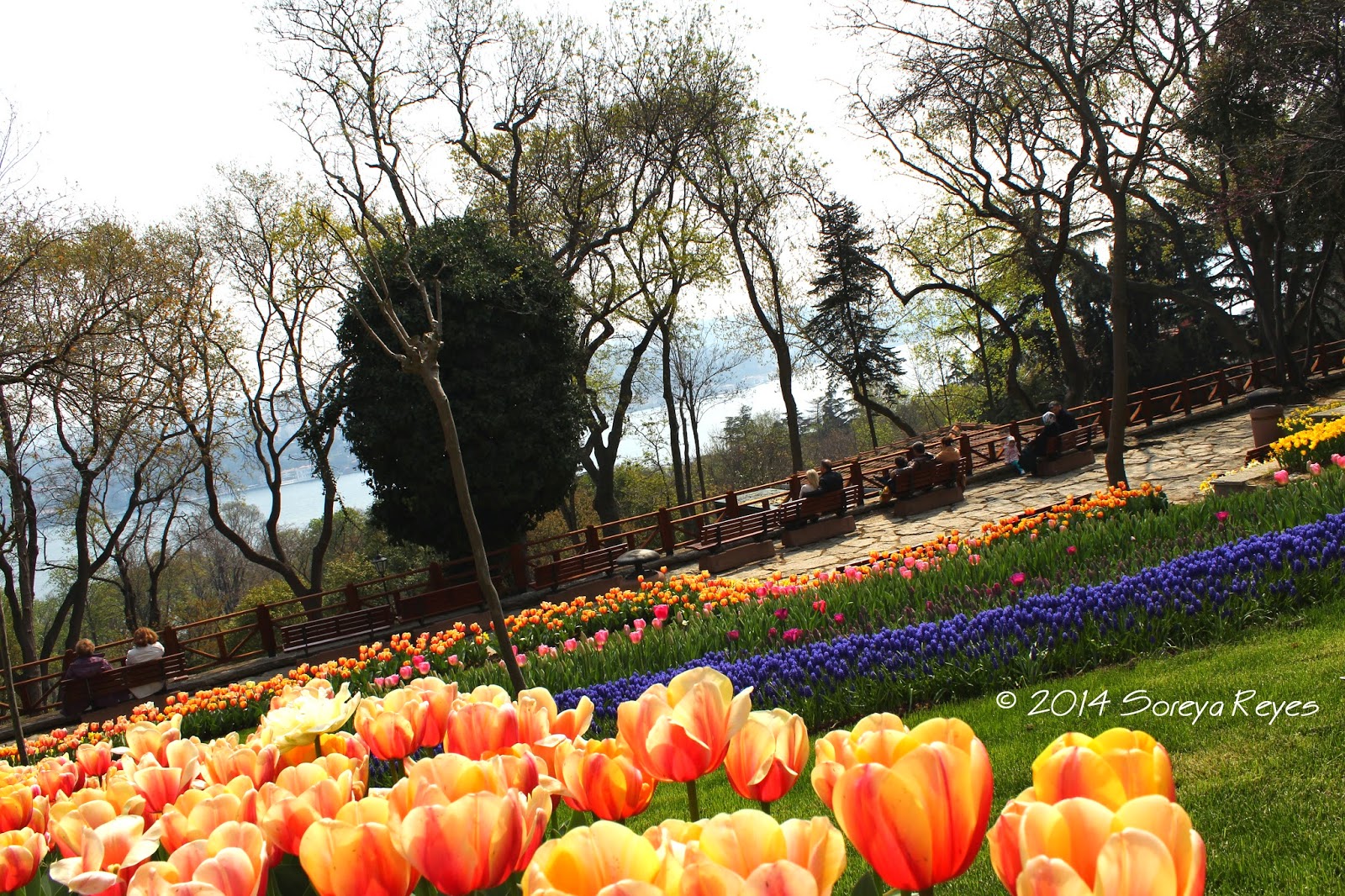 The Emirgan Woods were once the playground of the Egyptian Ehedive İsmail Paşa, now is a public park with a lake and three inviting cafes housed in 19th century mansions.  Let's review a littie about the history of this place. 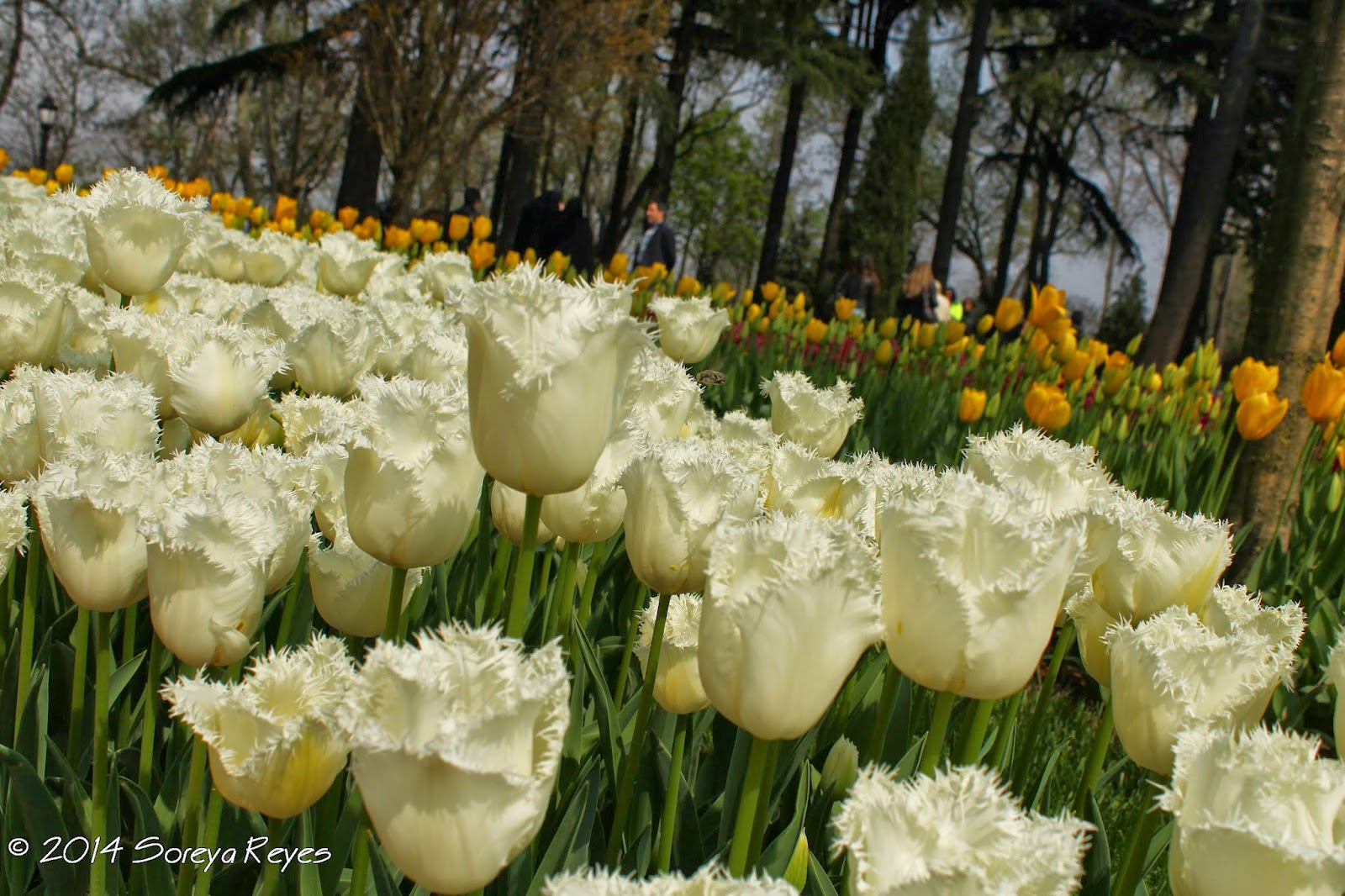 Emirgan was originally called Emirgune after Emire Güne Han, an İranian noble-man sho had surrendered the castle of Yerevan (now in Armenia) to Sultan Murad IV withouth a fith in 1635. İn return for this, the Sultan brought him to İstanbul, renamed him Yusuf Paşa and gave him what were the Feridun Bey Gardens and are now the 500,000 square meter Emirgan Woods. 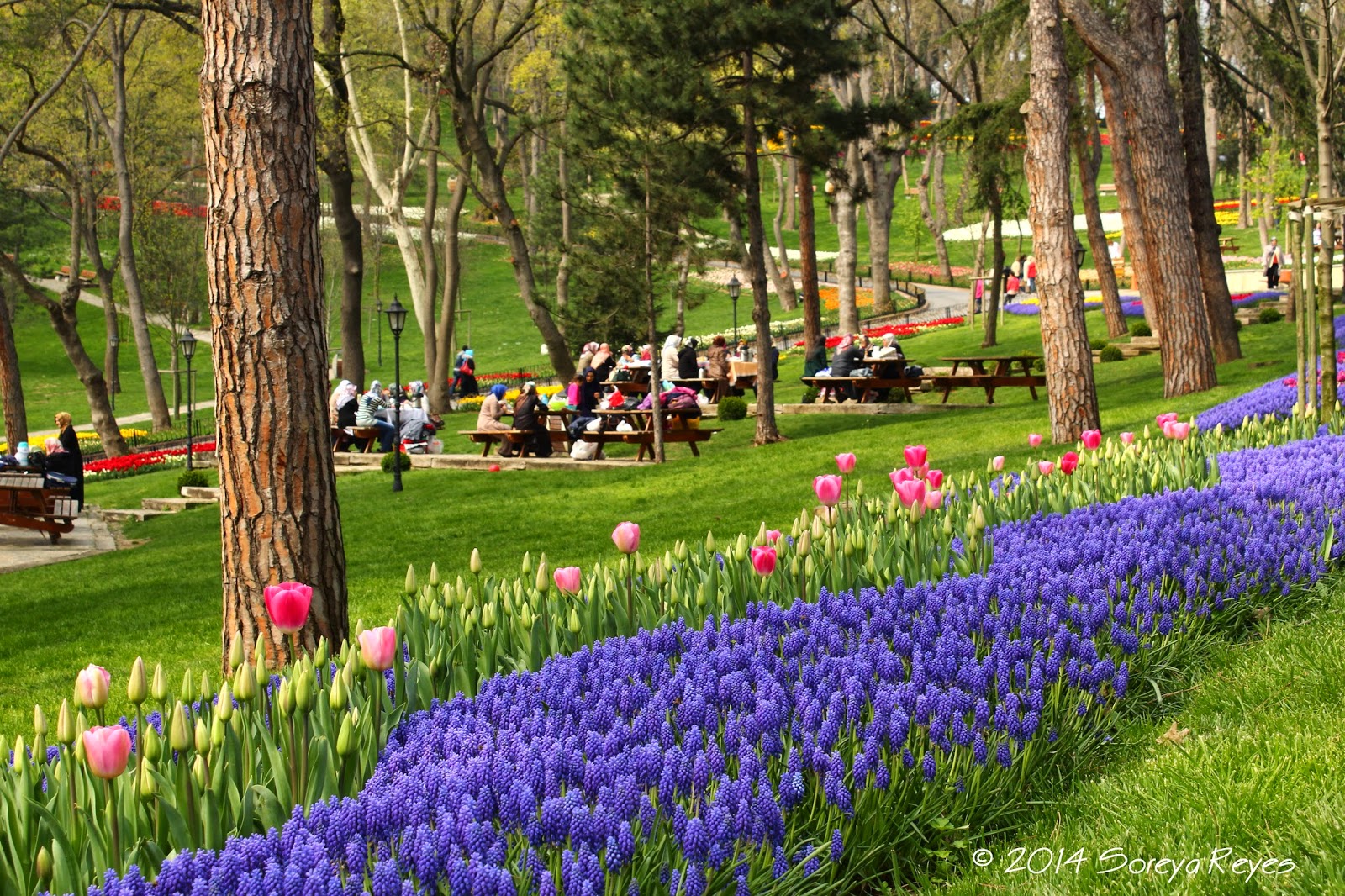 For a long time, the Sultan and nomble remained friends and passed many drunken nights together in the gardes which are described in lyrical terms by the contemporary Ottomal travelere Evliya Çelebi. After Murad's death, his successor İbrahim the Mad had Yusuf executed. 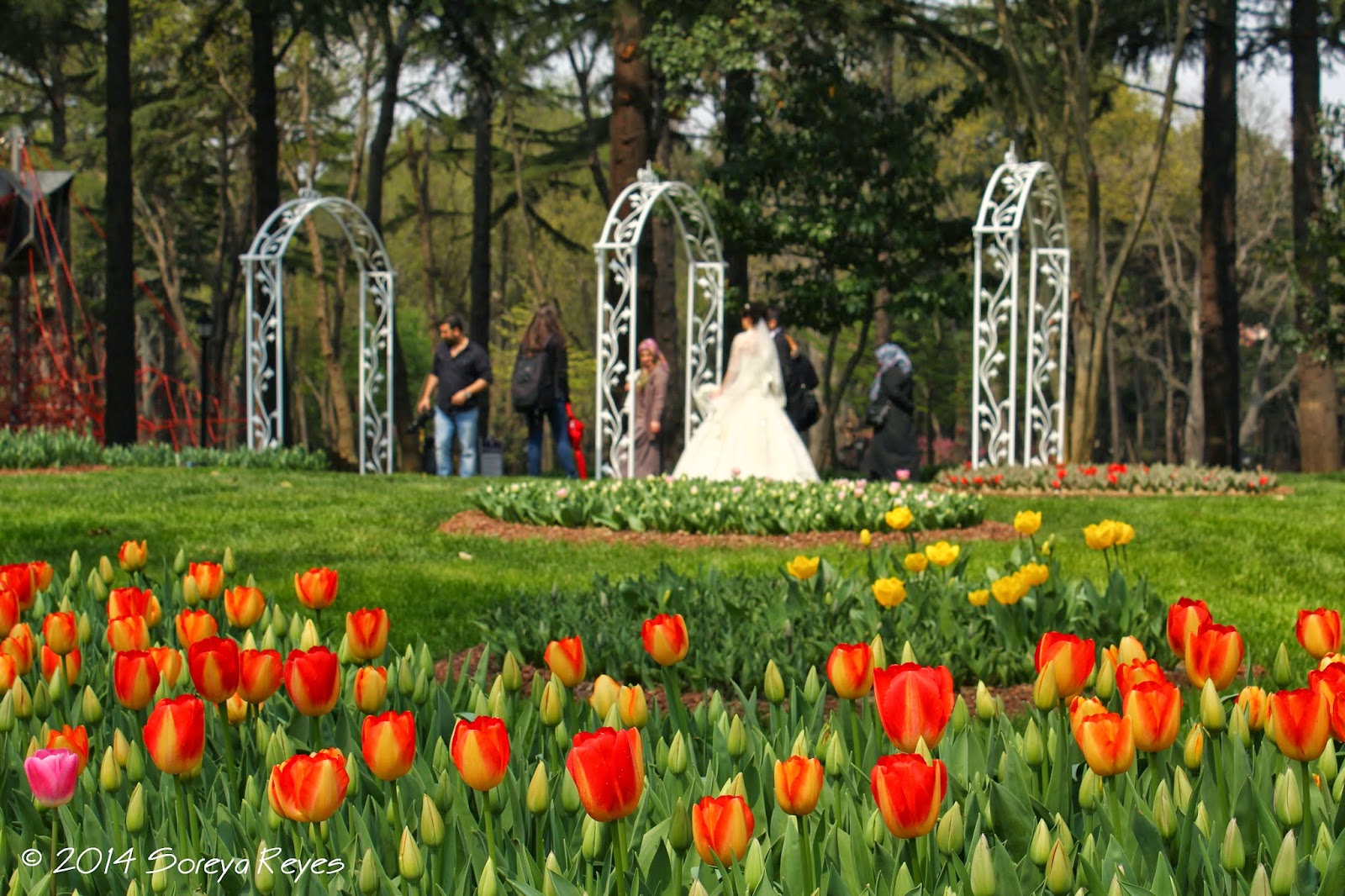 İn the 19th century Sultan Abdülaziz gave the woods to the Egyptian Khedive İsmail Paşa (1830-95) who built himself a seaside palace and then adorned the garden with the Yellow (sarı), White (Beyaz) and Pink (Pembe) pavilions.   Forced to abdicate under pressure from the French and British in 1879, Ismail, known as the Magnificent despite running up huge debts for Egypt, lived out the remainder of this days at Emirgan as a virtual state prisoner. 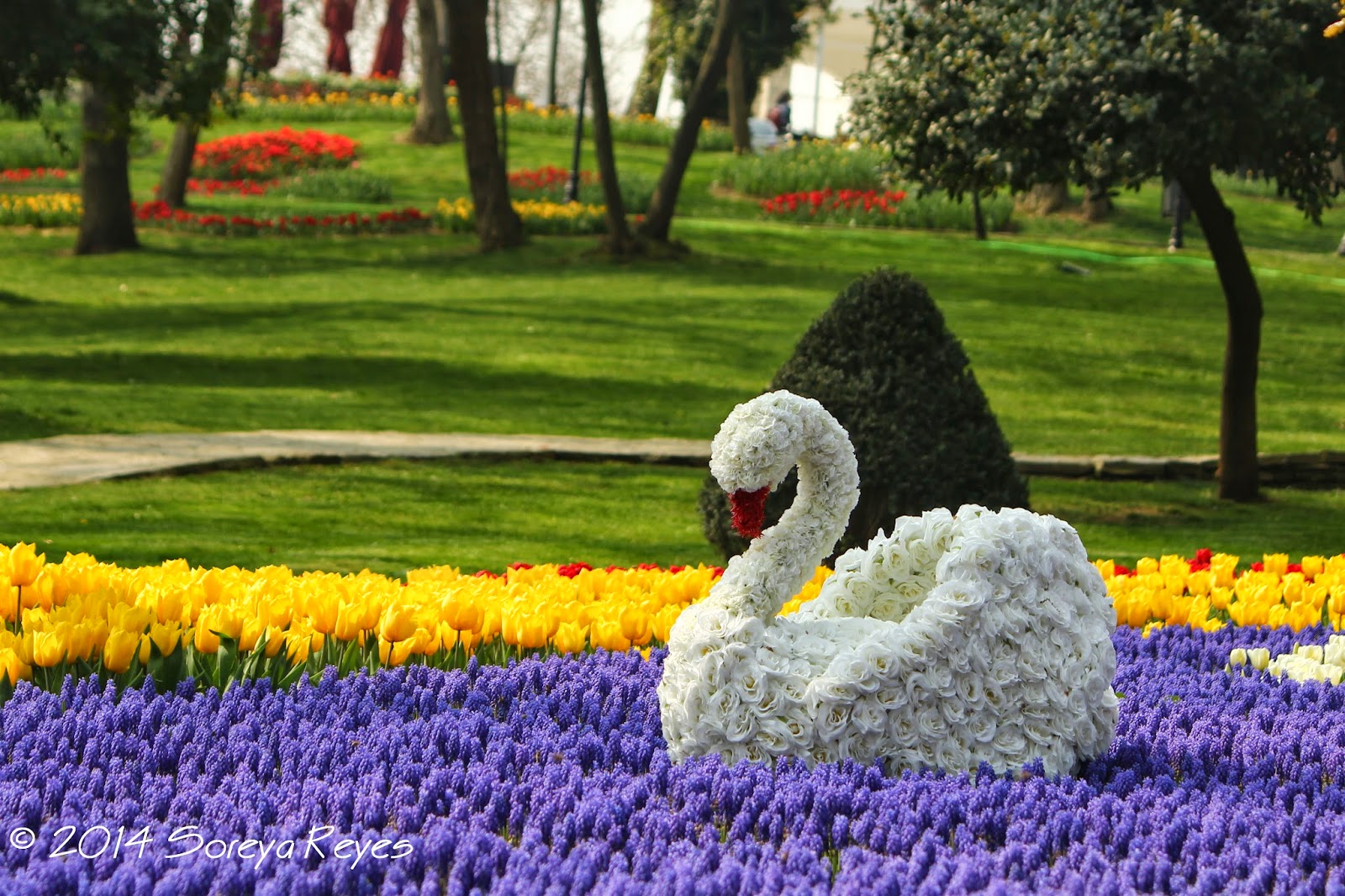 İn 1943 the İstanbul ahthorities bougth the Emirgan Woods and turned them into a public park.  Many families come also during weekdays to have a picknick. 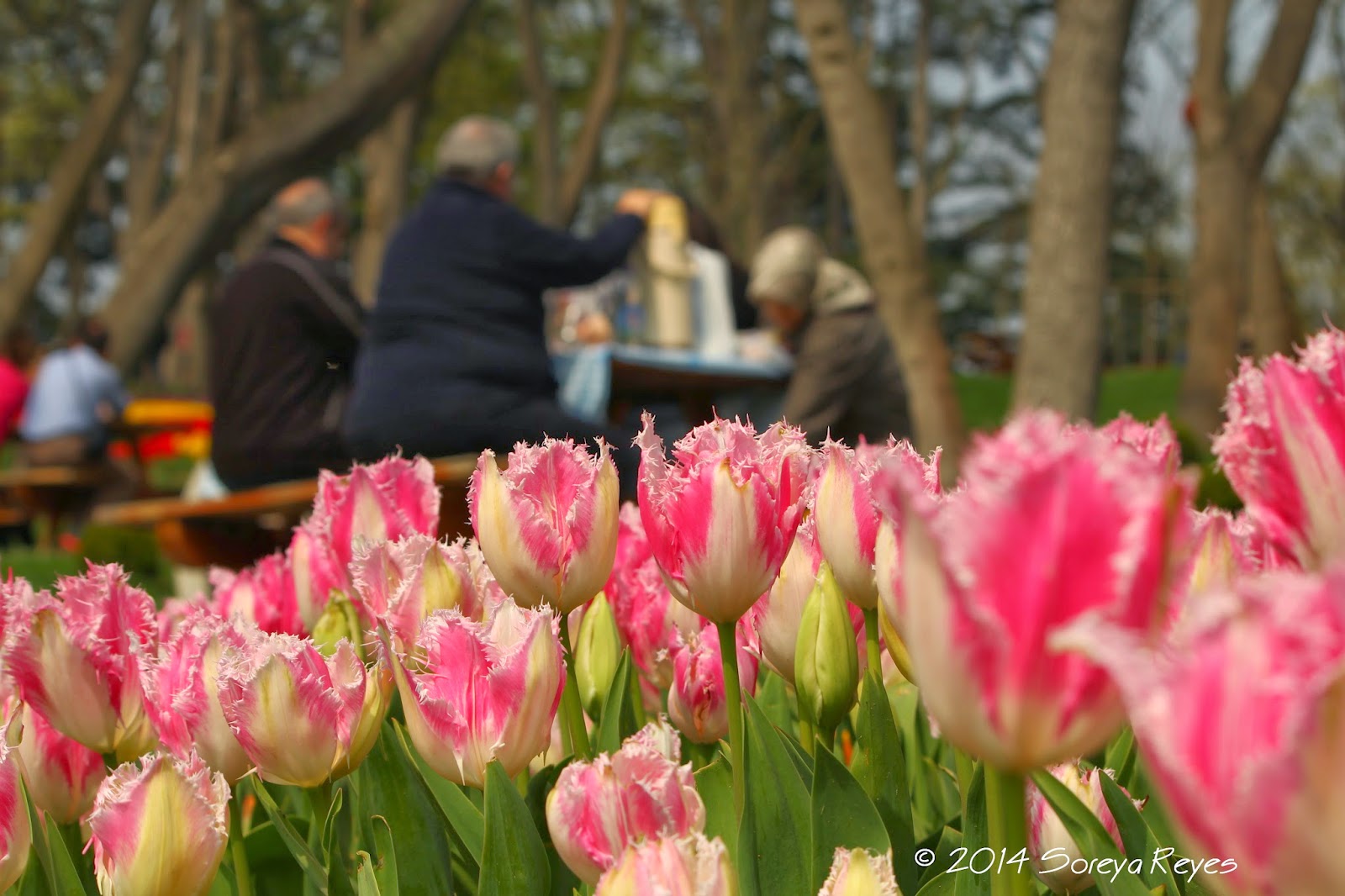 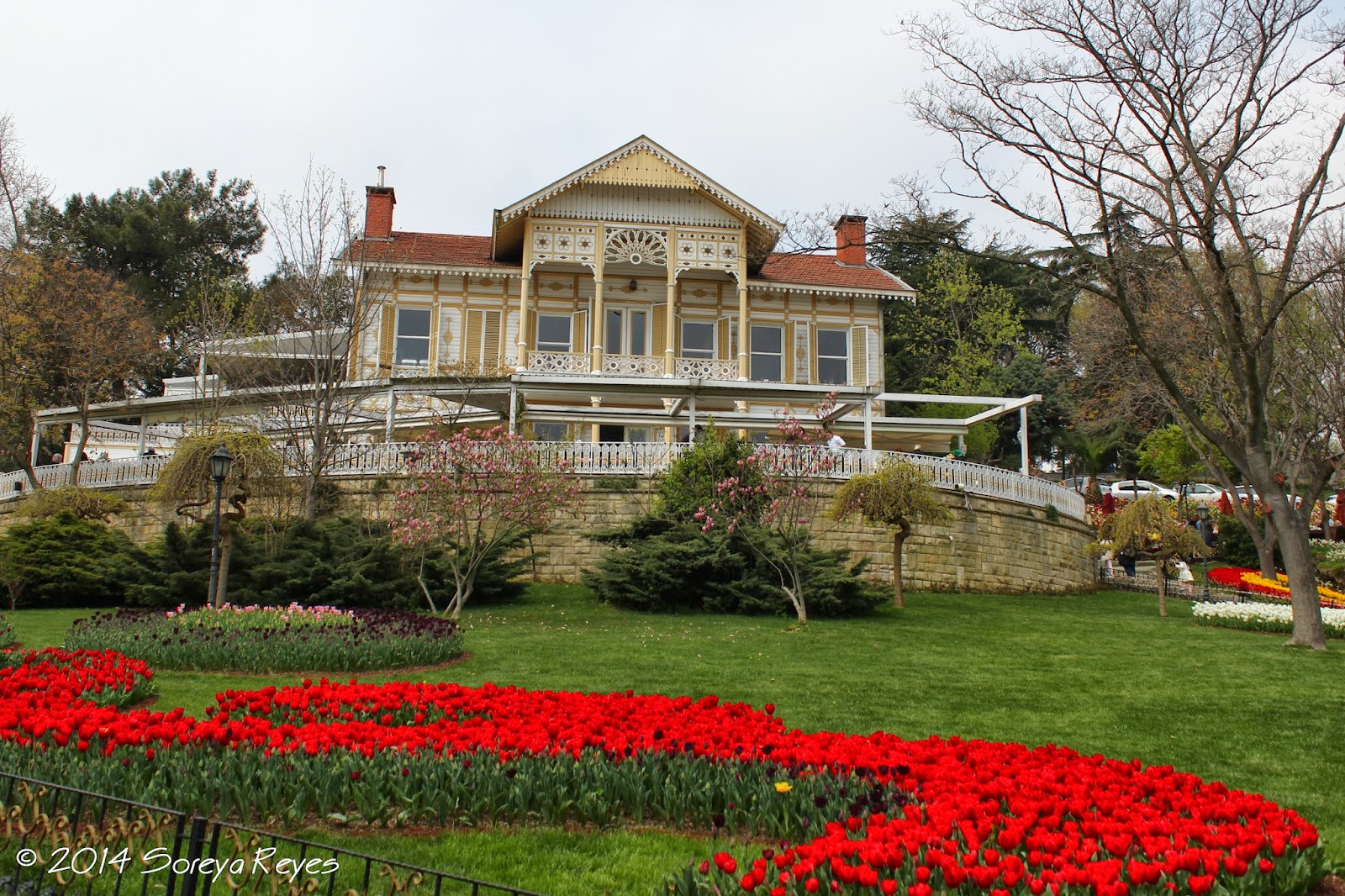 Designed to look like a Swiss hunting lodge by Sarkis Baylan in the 1870s, the Yellow Mansion now houses a restaurant and cafe.  All cafes and restaurants are run by Istanbul Metropolitan Municipality, so the prices are not very high, but you cannot find any alcohol. 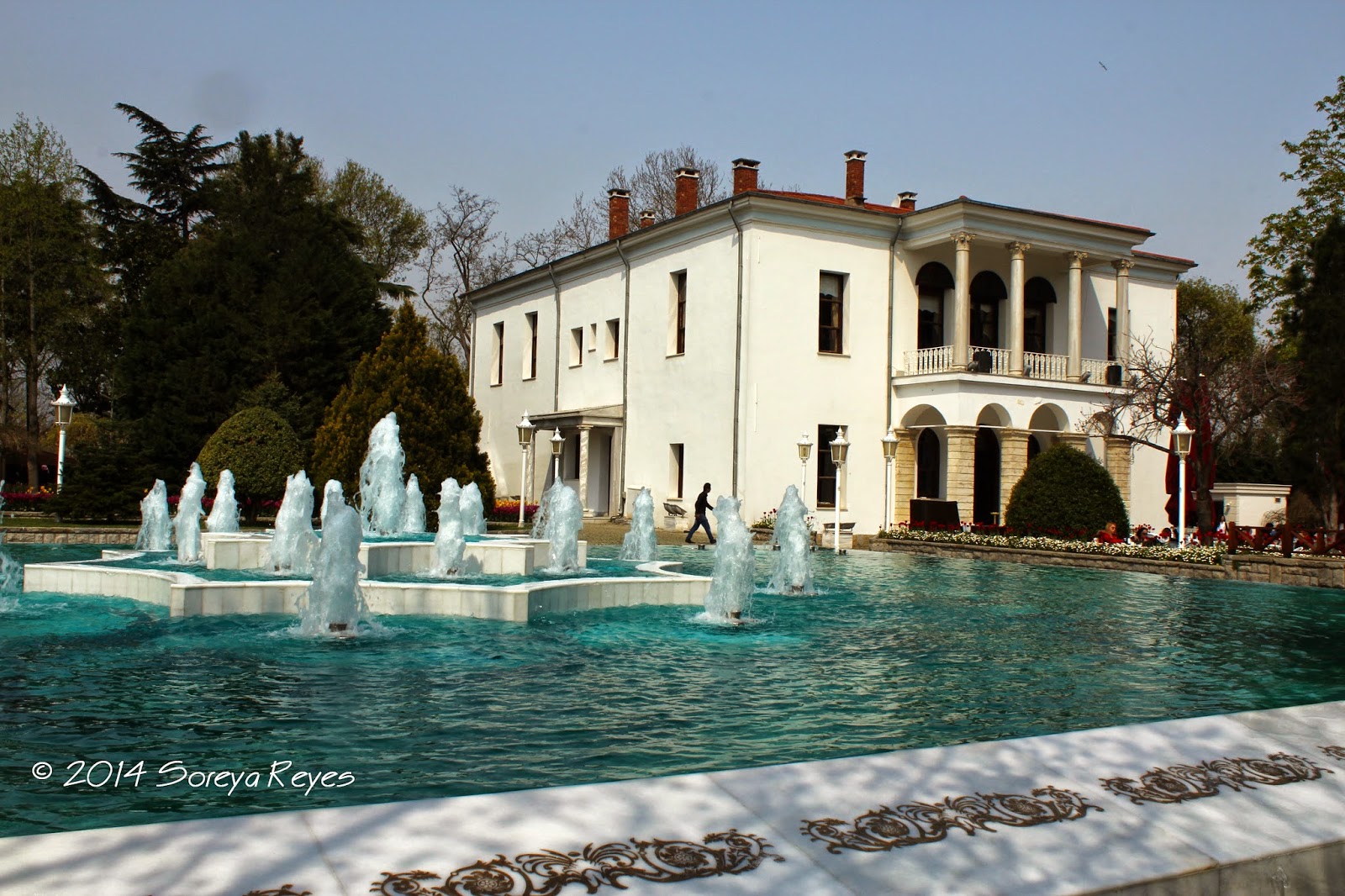 
The Neoclassical Shite Mansion (Beyaz Köşk) has a cafe and restaurant.  They serve a breakfast buffet on Sunday mornings. 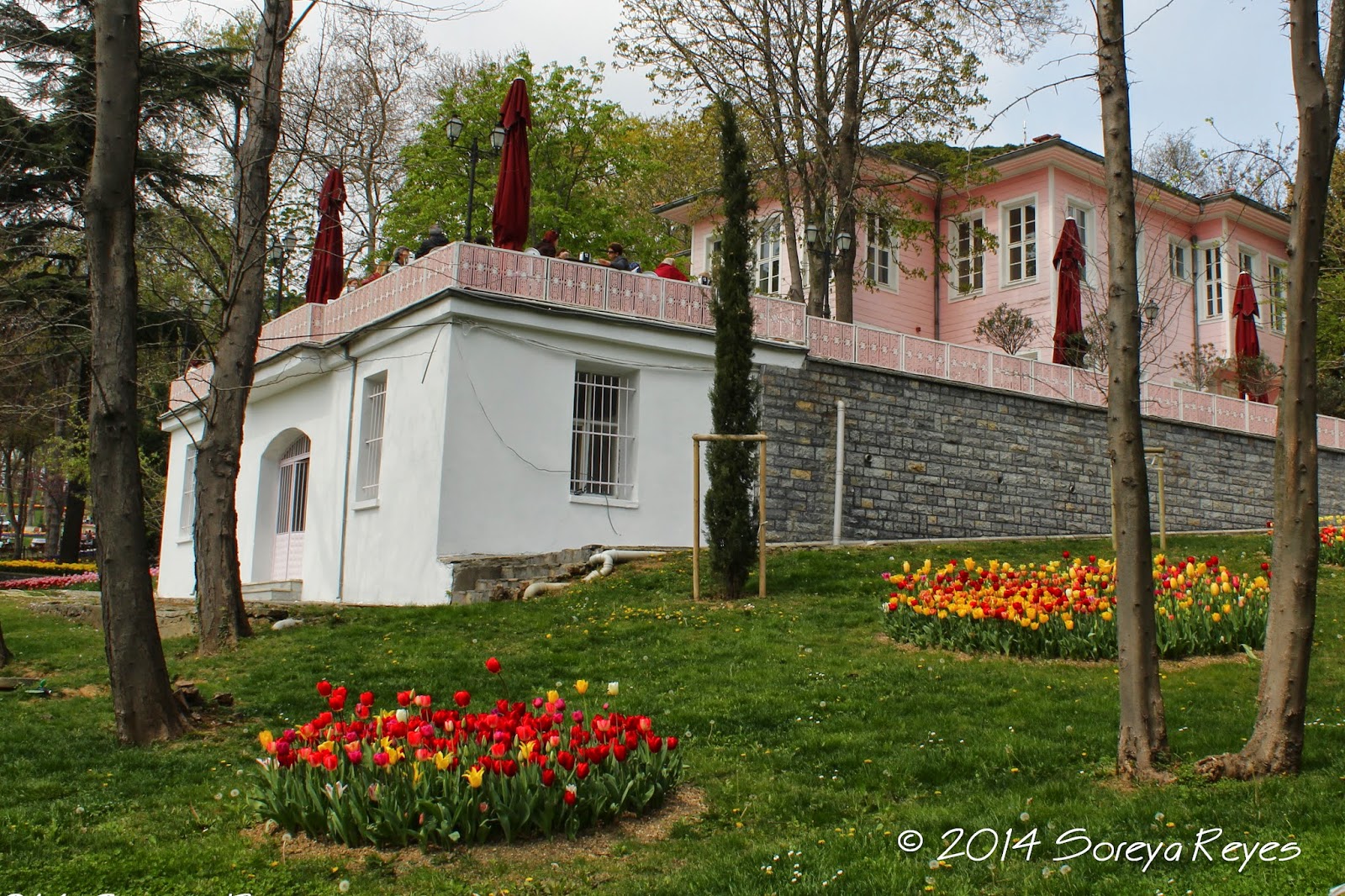 The Pink Mansion (Pembe Köşk) was modeled on a townhouse. The oldest of the three, it was restored in 1982 and now hosts- you've guessed it - a cafe.   All three mansions were restored in the 1980s by the Turkish Touring and Automobile Club. 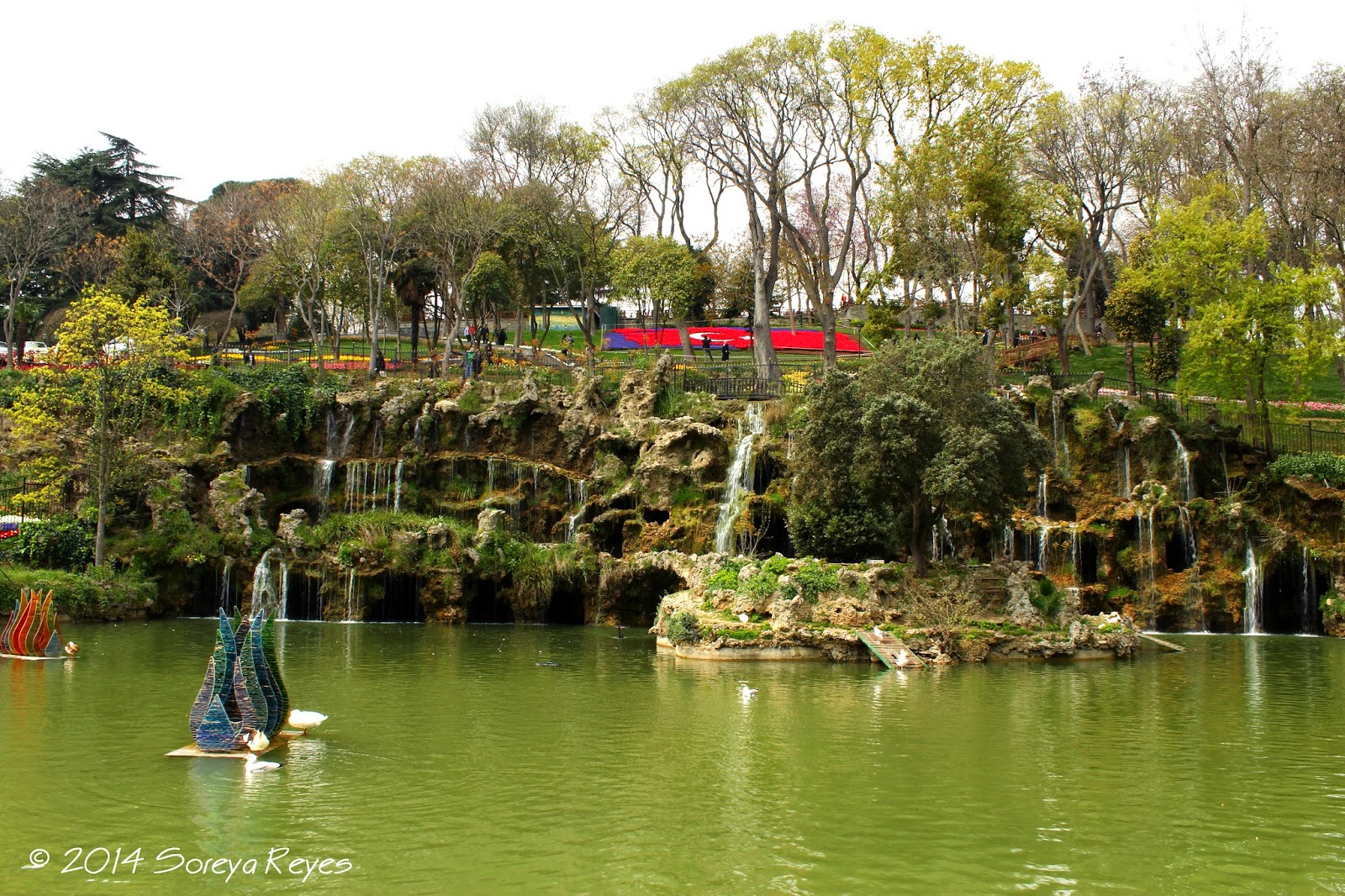 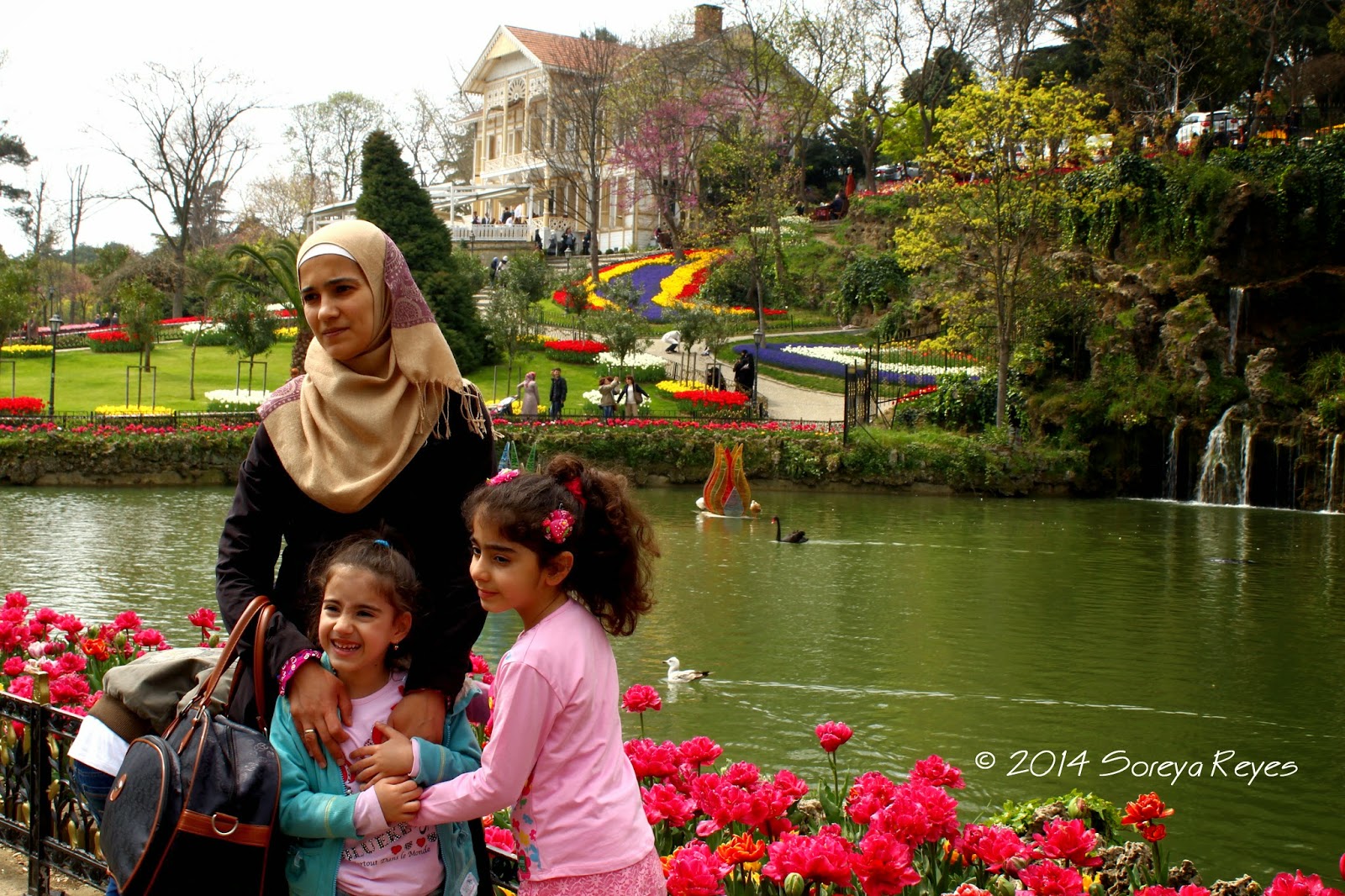 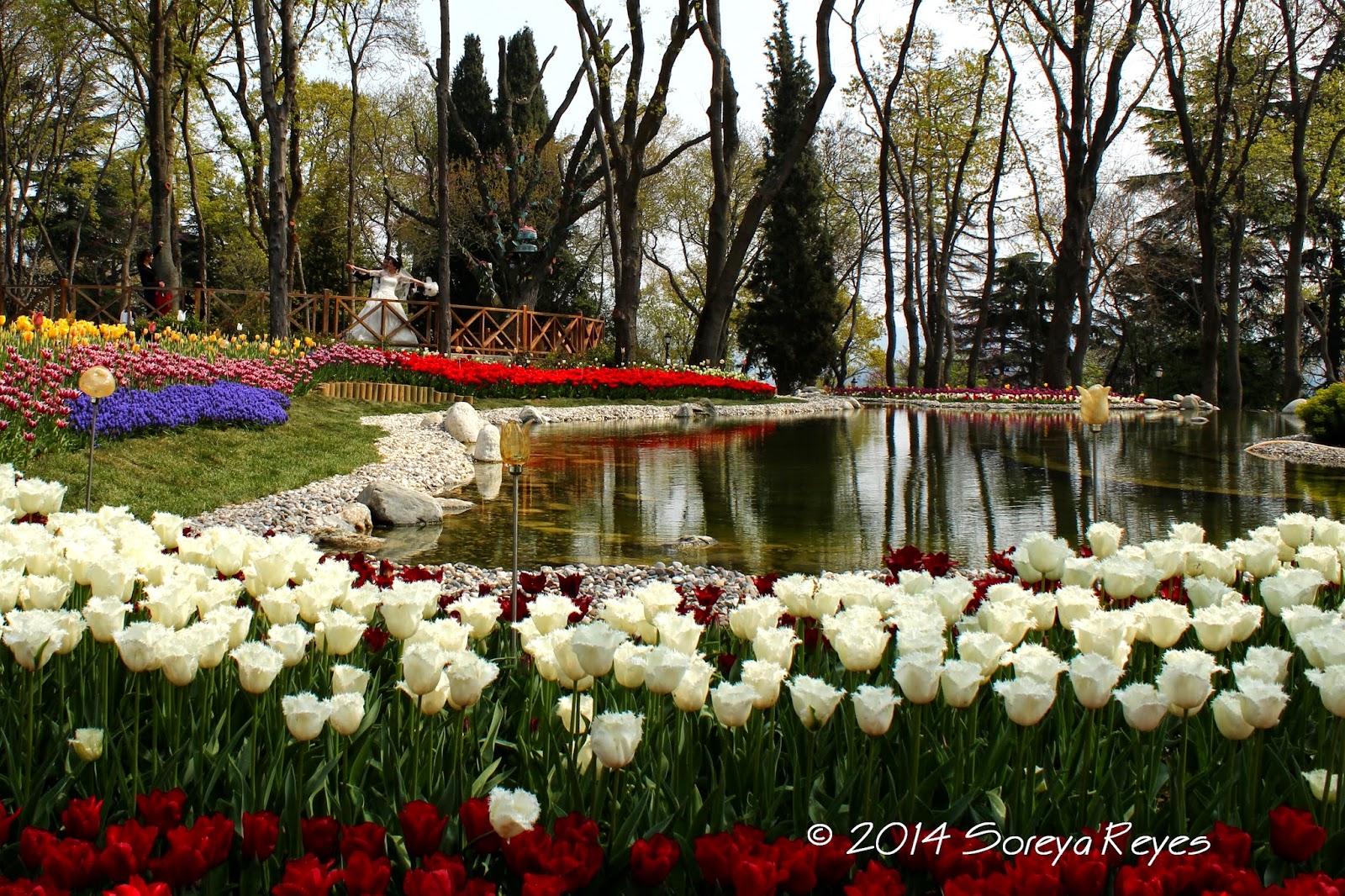 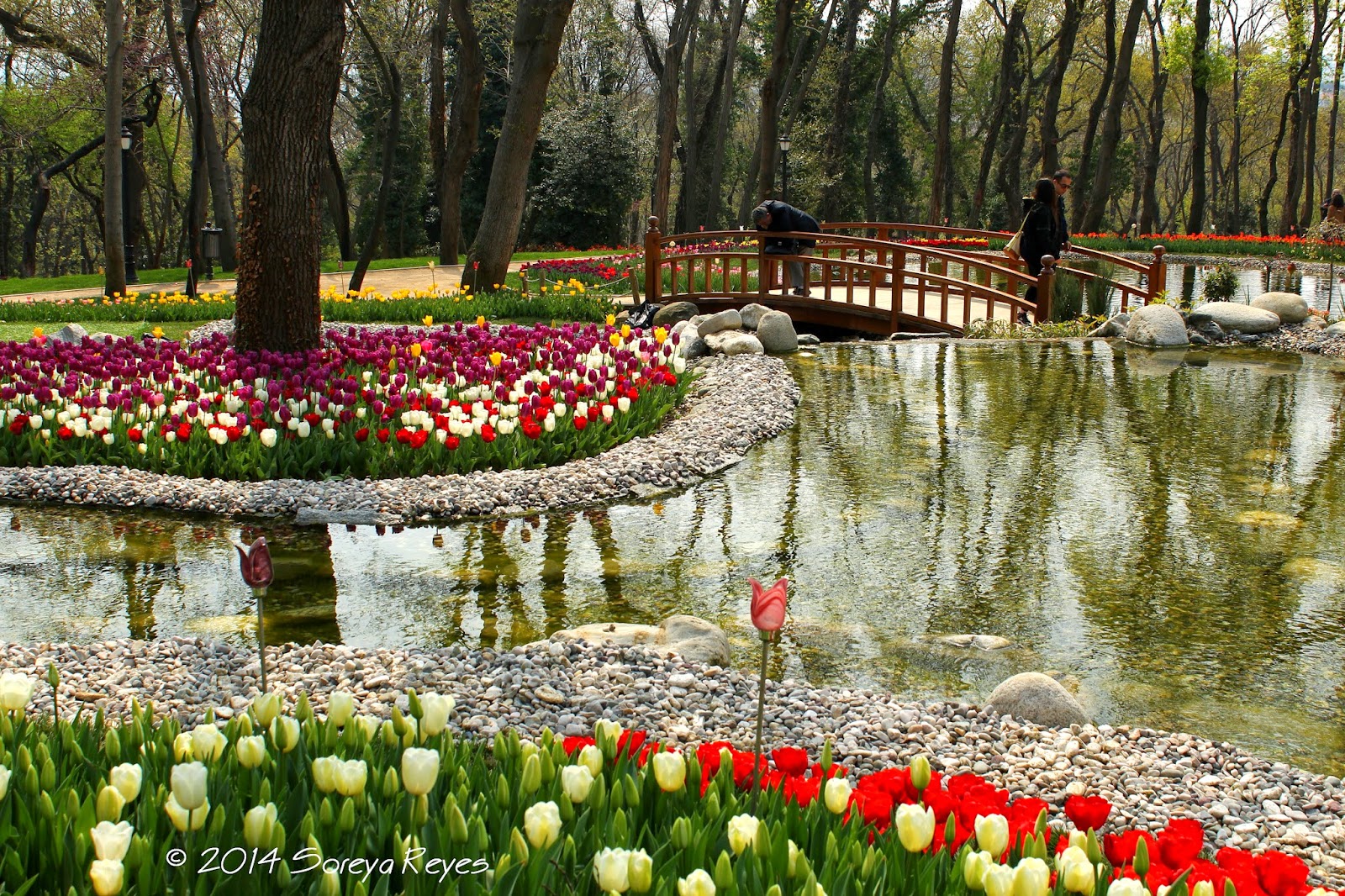 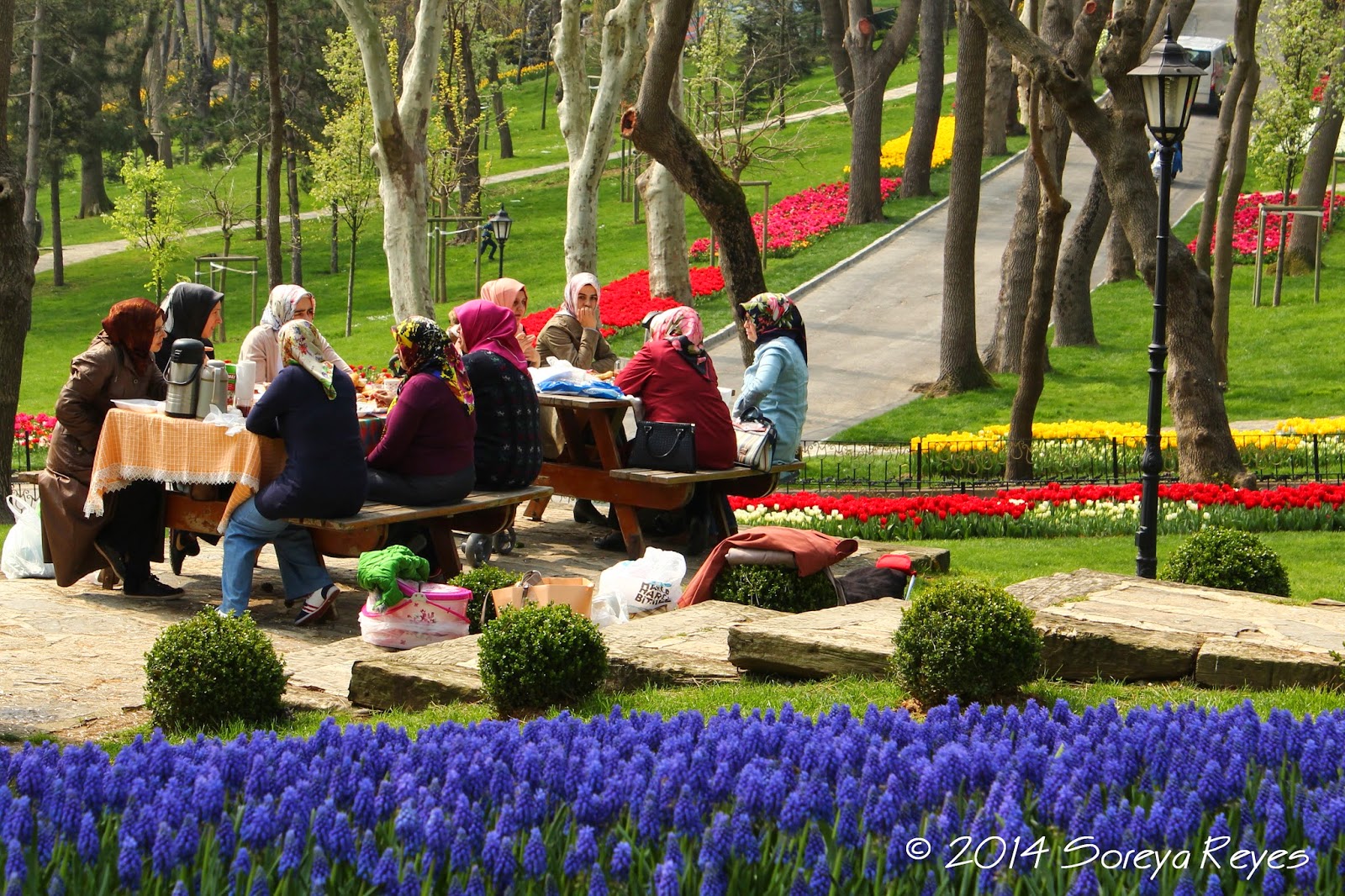 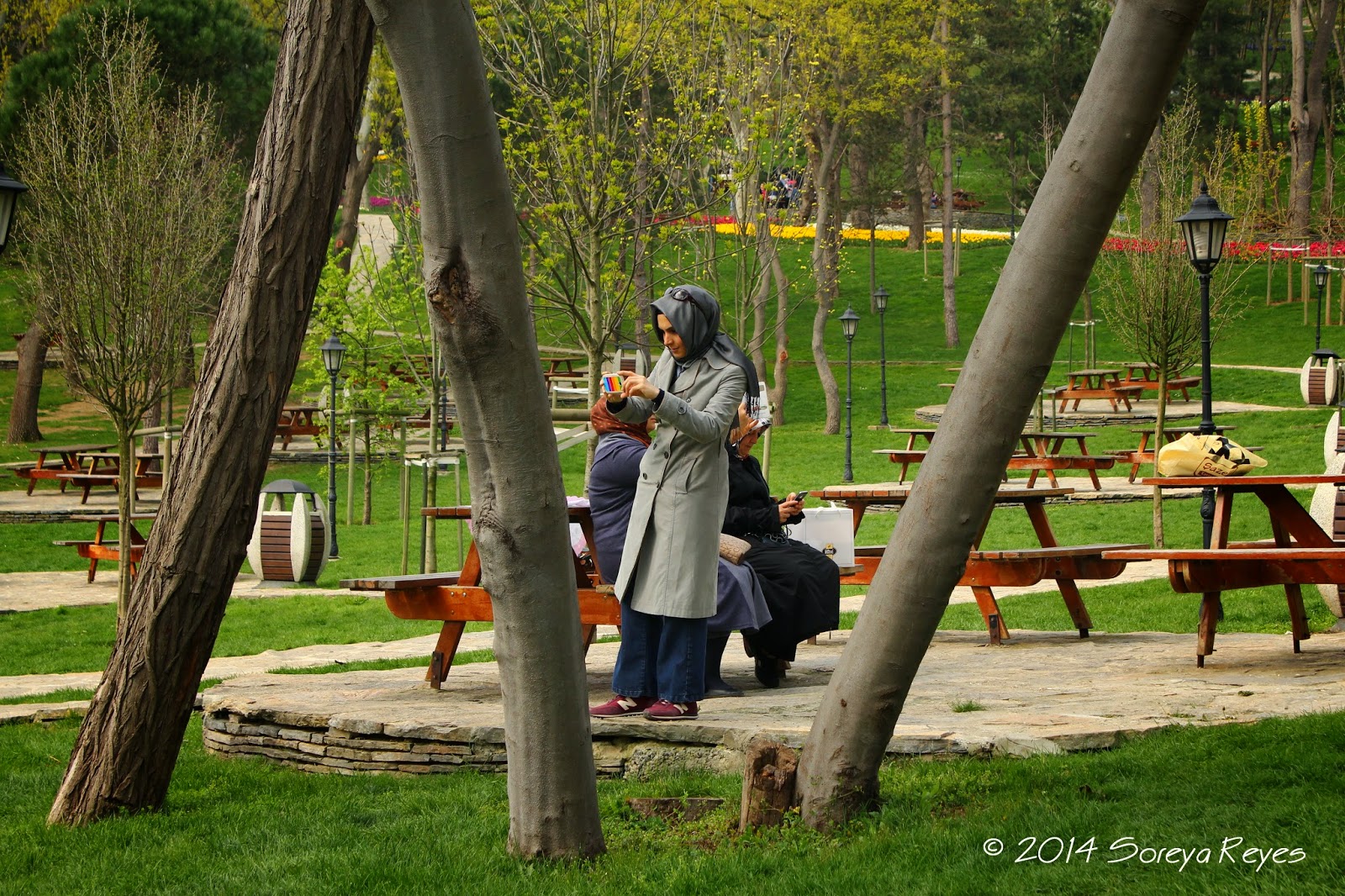 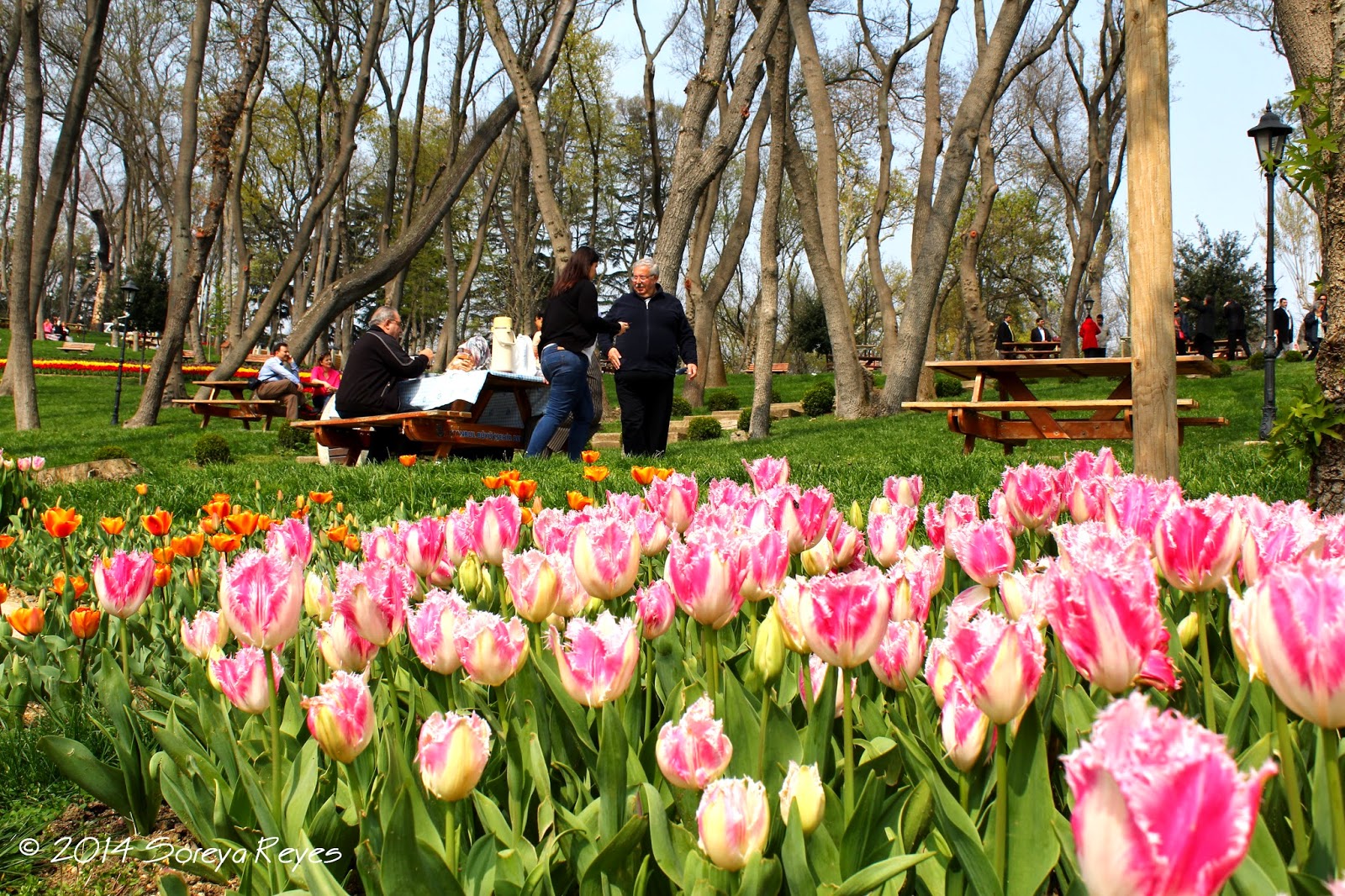 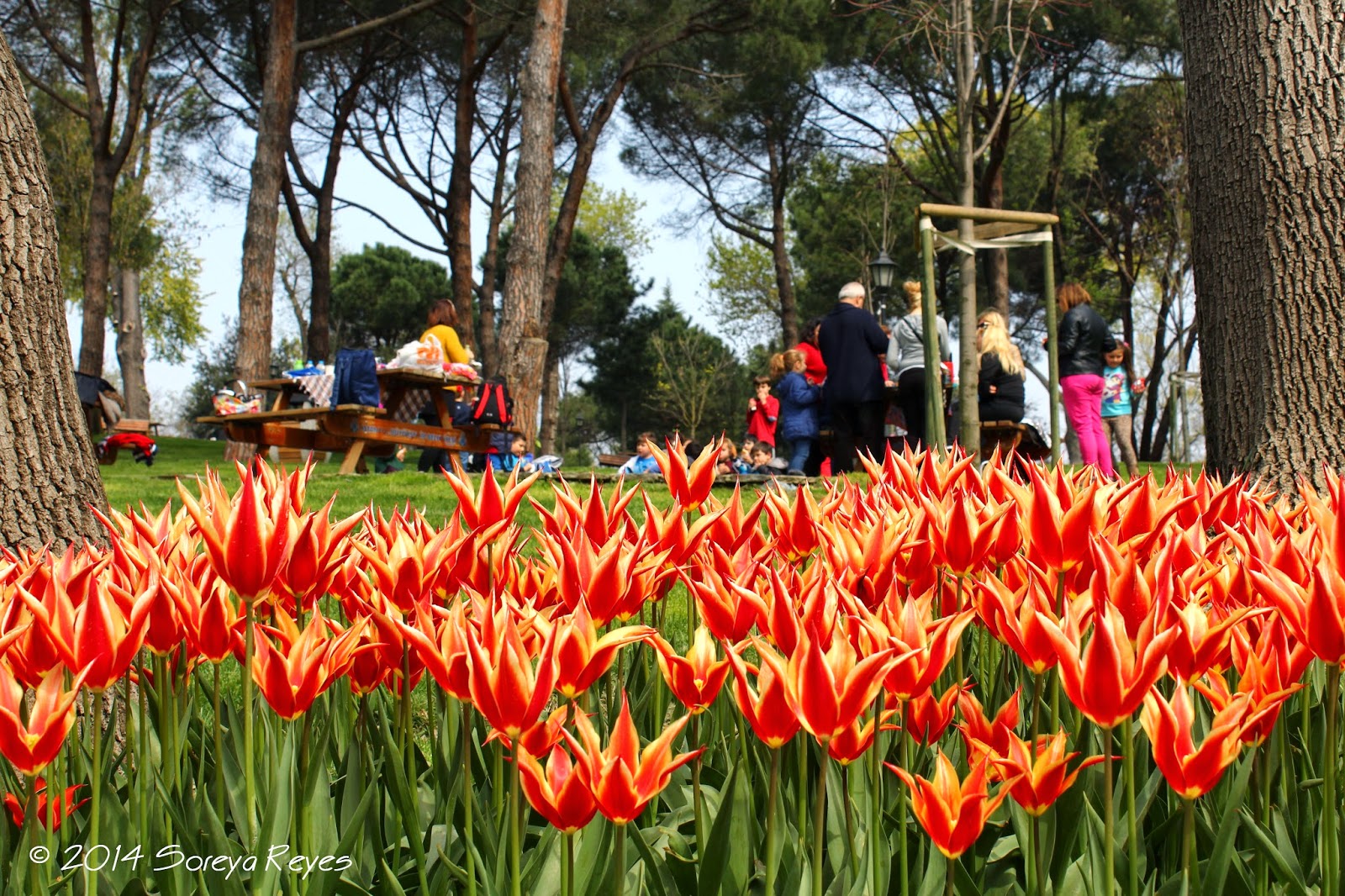 The Tulip were originally a wild flower growing in the Central Asia and were first cultivated by the Turks as early as 1,000 AD.   The first Tulip mania occurred way back in 1500's in Turkey - which was the time of the Ottoman Empire and of Sultan Suleiman I (1494-1566). Tulips became highly cultivated blooms, developed for the pleasure of the Sultan and his entourage.  During the Turkish reign of Ahmed III (1703-30) it is believed that the Tulip reigned supreme as a symbol of wealth and prestige and the period later became known as 'Age of the Tulips'. 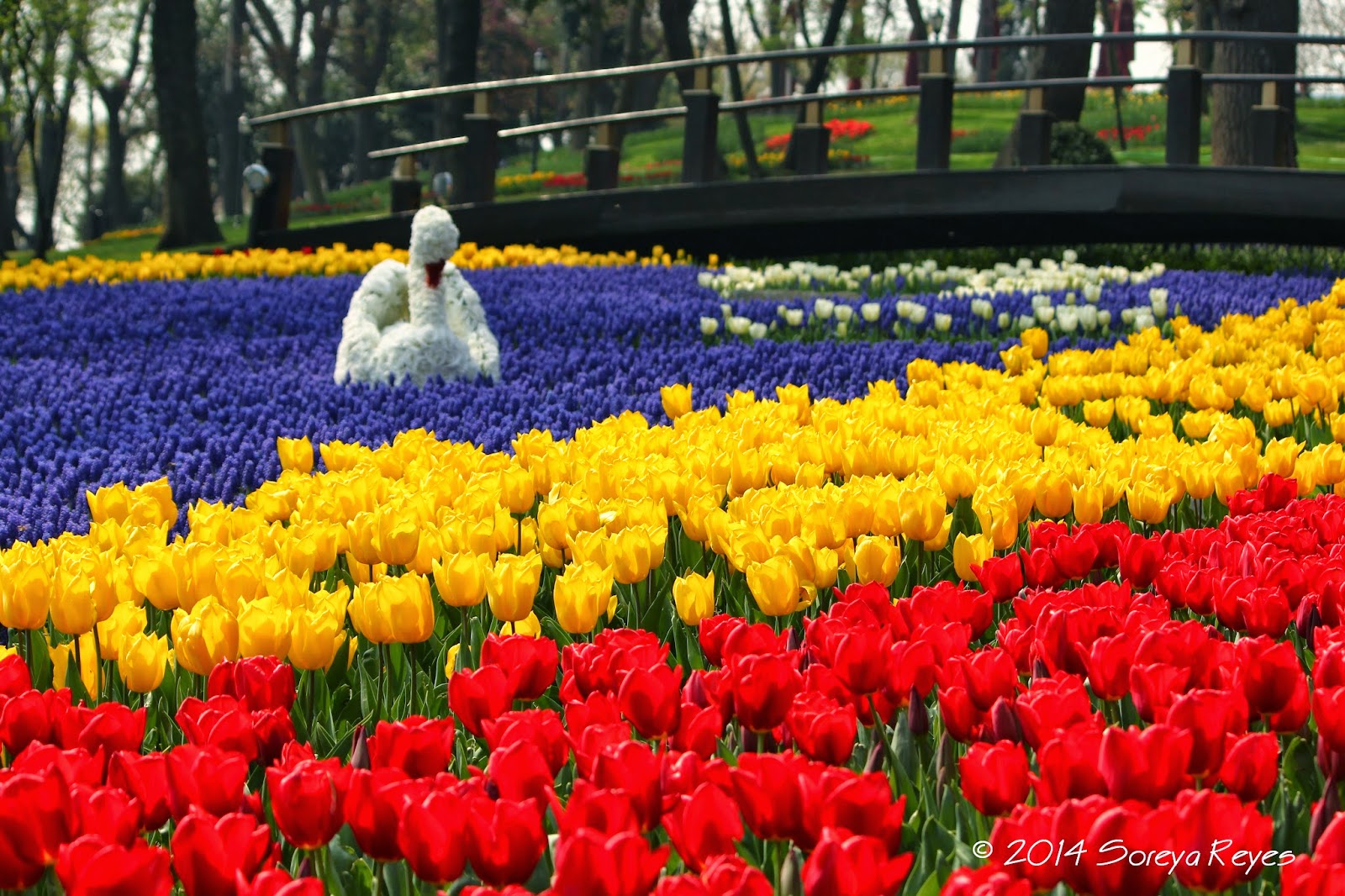 The swan lake
The tulips begin to bloom around the end of March or beginning of April, depending on the weather. The Turks had strict laws governing the cultivation and sale of Tulips. For example: during the reign of Sultan Ahmed III, it was forbidden to buy or sell tulips outside the capital - a crime punishable by exile (which is a mild punishment compared to torture). It was often commented that, during this time, the tulip was more highly valued than a human life. 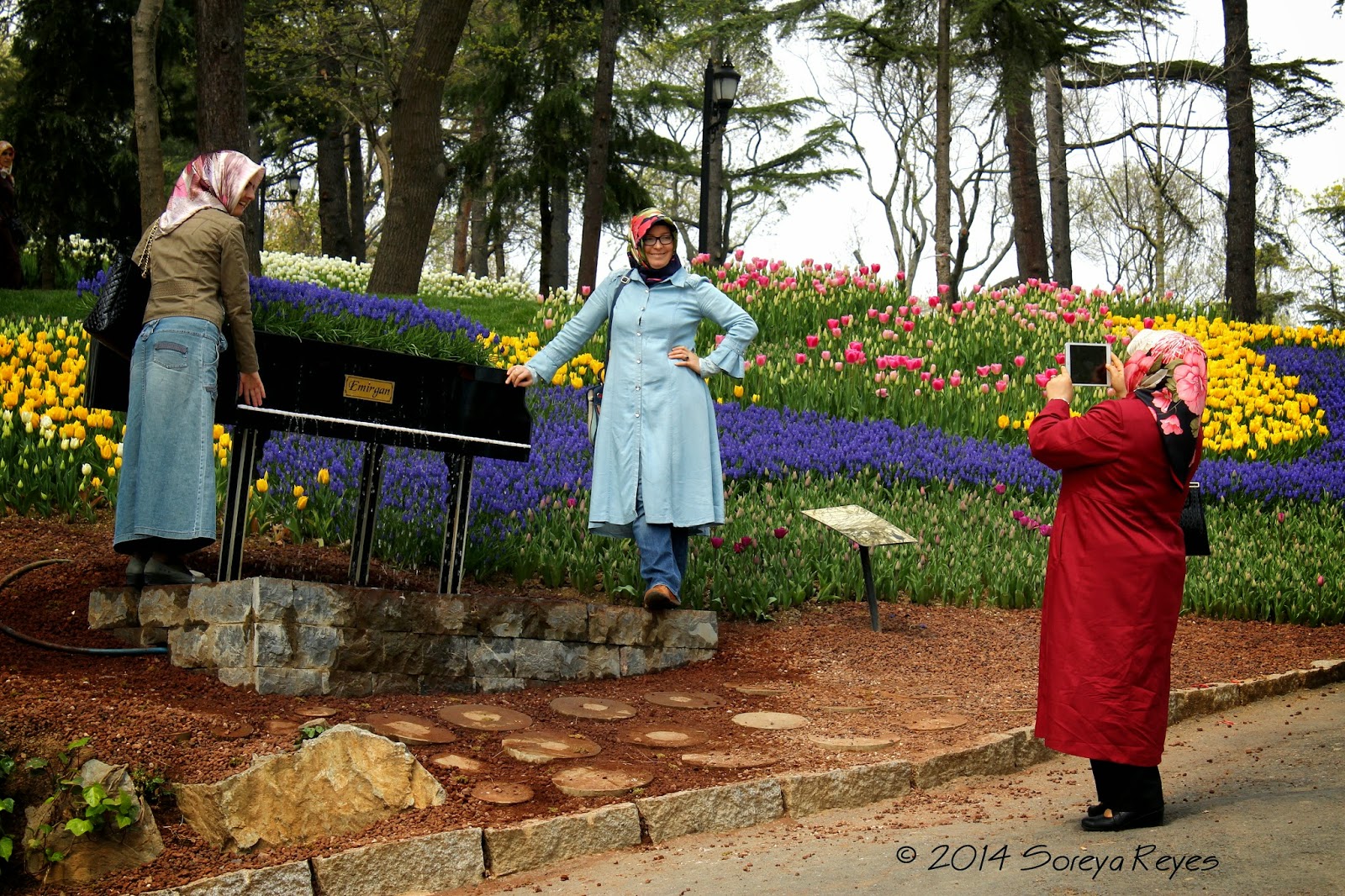 
It was during the early 1700's that the Turks began what was probably the first of the Tulip Festivals which was held at night during a full moon. Hundreds of exquisite vases were filled with the most breath-taking Tulips, crystal lanterns were used to cast an enchanting light over the gardens whilst aviaries were filled with canaries and nightingales that sang for the guests. Romantically, all guests were required to wear colours which harmonised with the flowers! 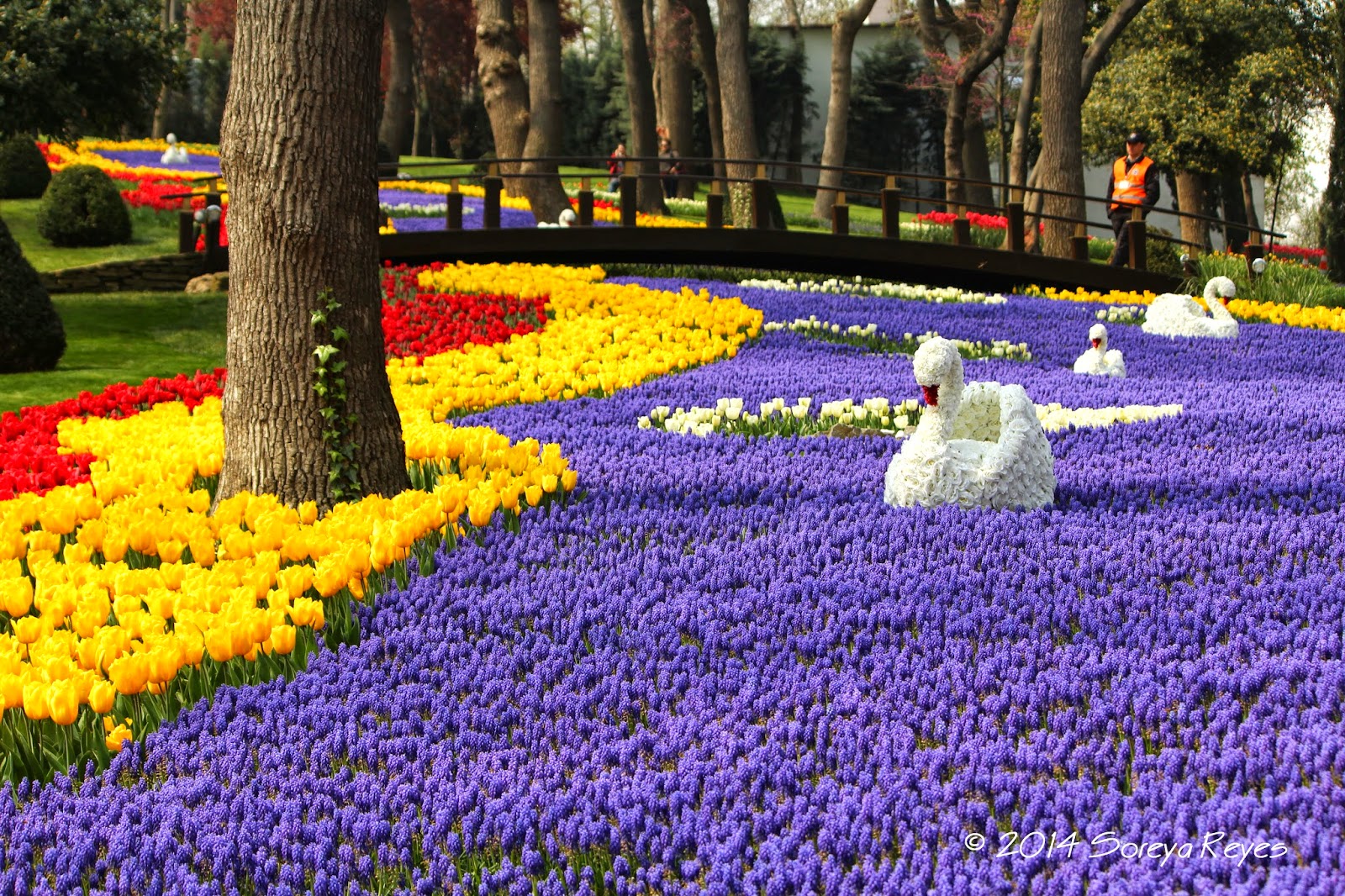 
The flower were introduced in the westen Europe and the Netherlands in the 17th century by Carolus Clusius, a famous biologist from Vienna. In the 1590’s he became the director of the Hortus Botanicus in Leiden, the oldest botanical garden of Europe, founded in 1587. He was hired by the University of Leiden to research medicinal plants and while doing so he got some bulbs from Turkey from his friend Ogier Ghiselain de Busbecq, the ambassador of Constantinople (presen-day Istanbul). He had seen the beautiful flower, called tulip after the Turkish word for turban, grow in the palace gardens and sent a few to Clusius for his garden in Leiden. He planted them and this was the start of the amazing bulb fields we can see today in Holland. 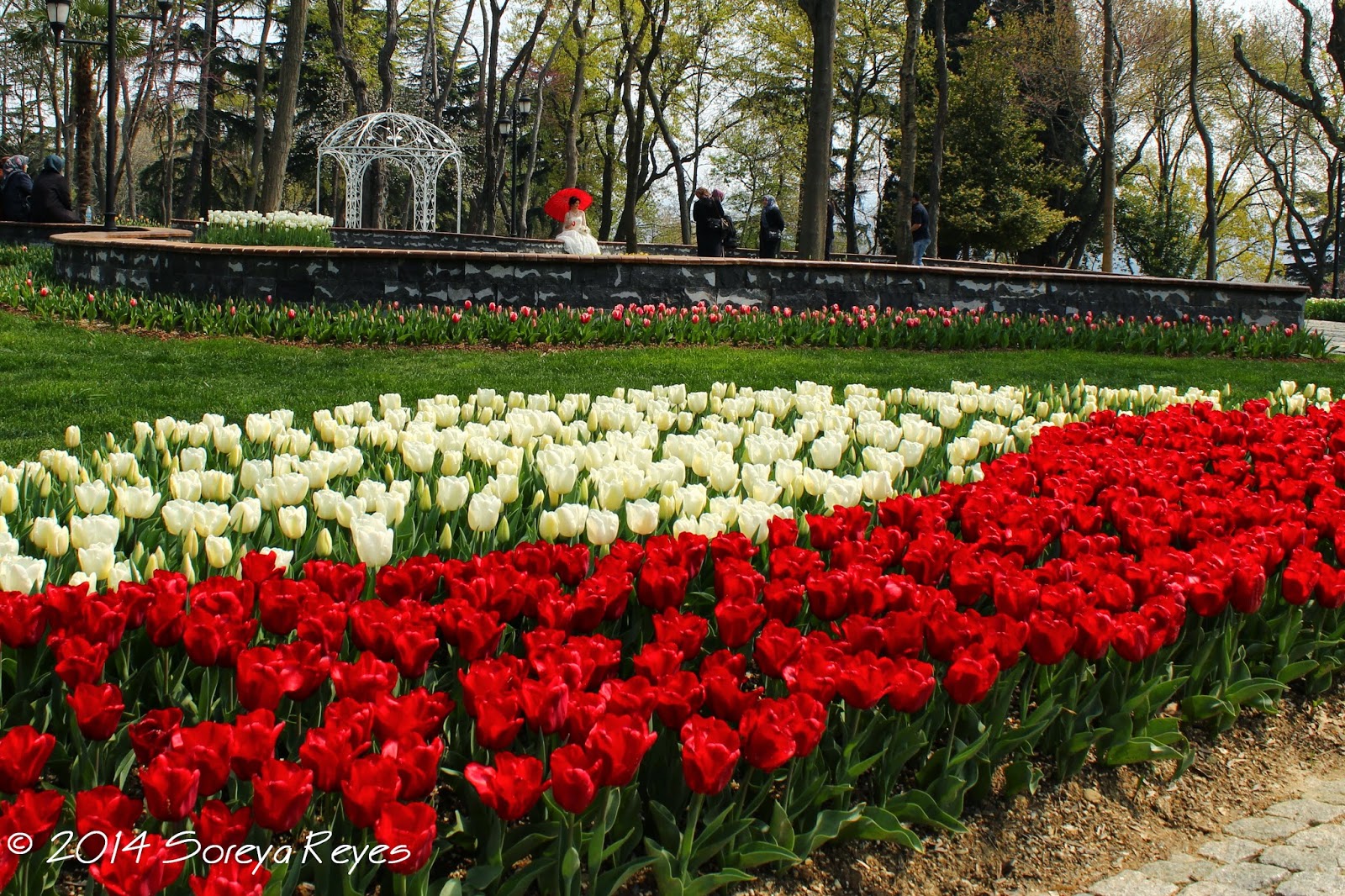 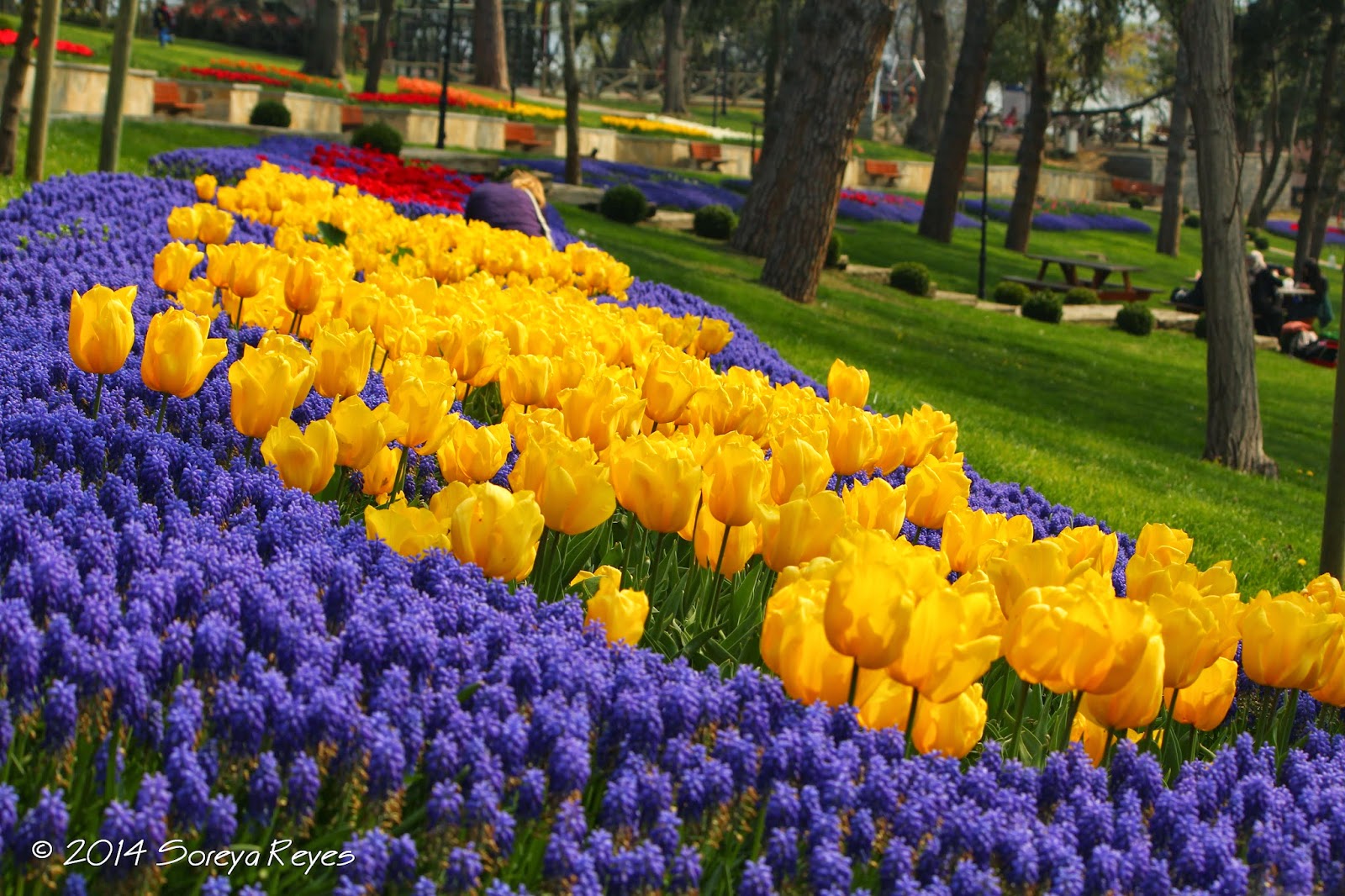 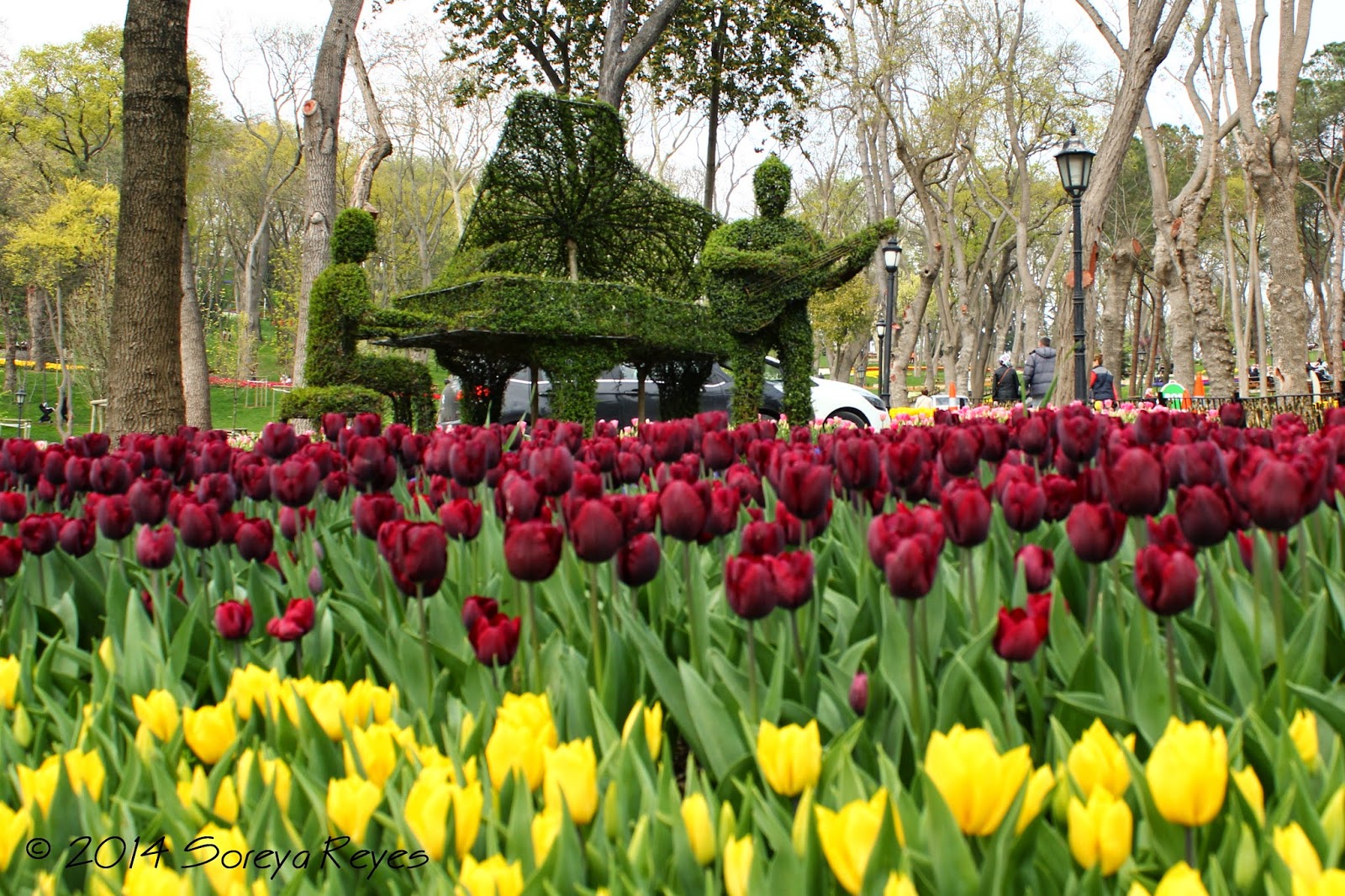 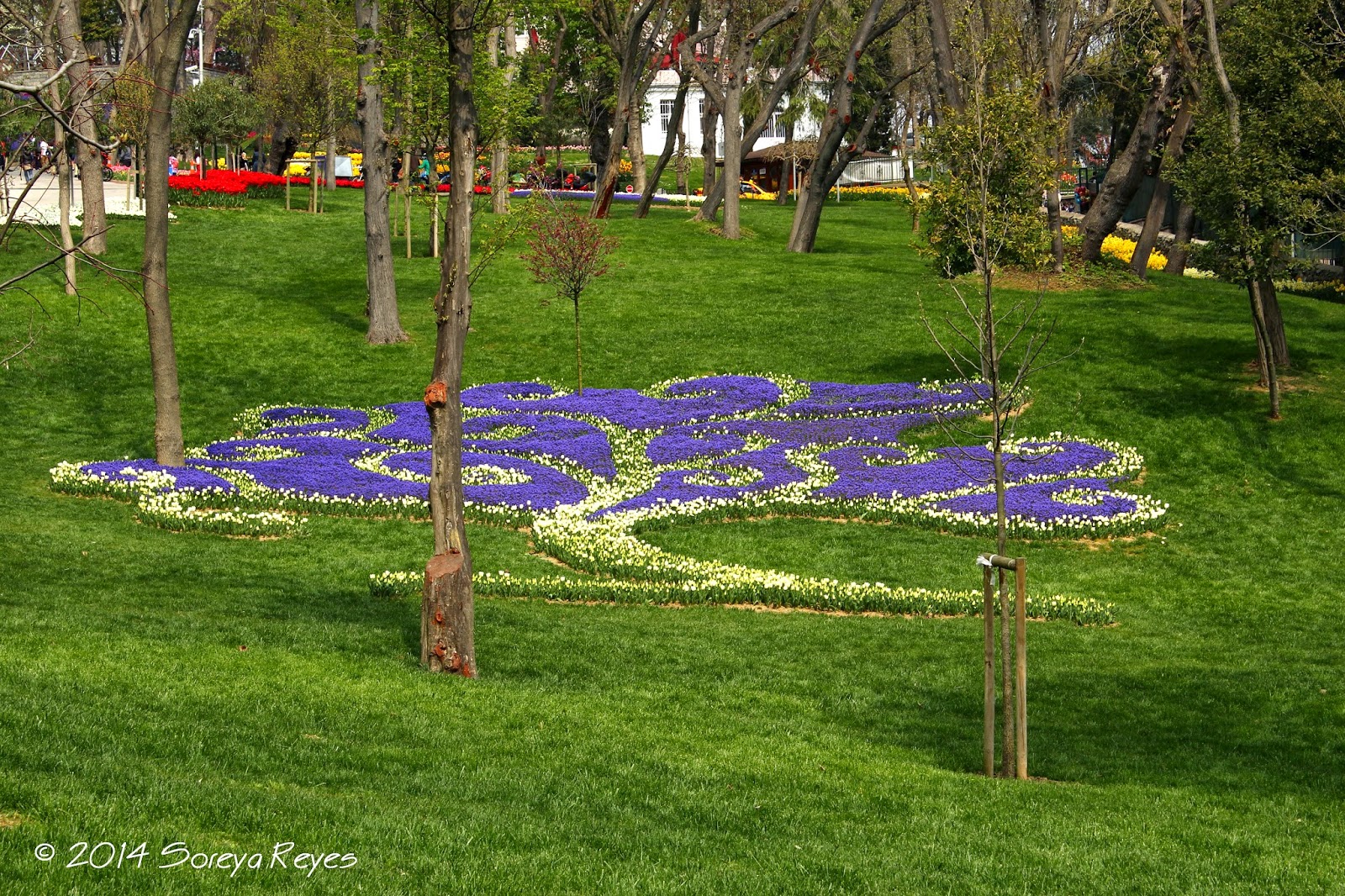 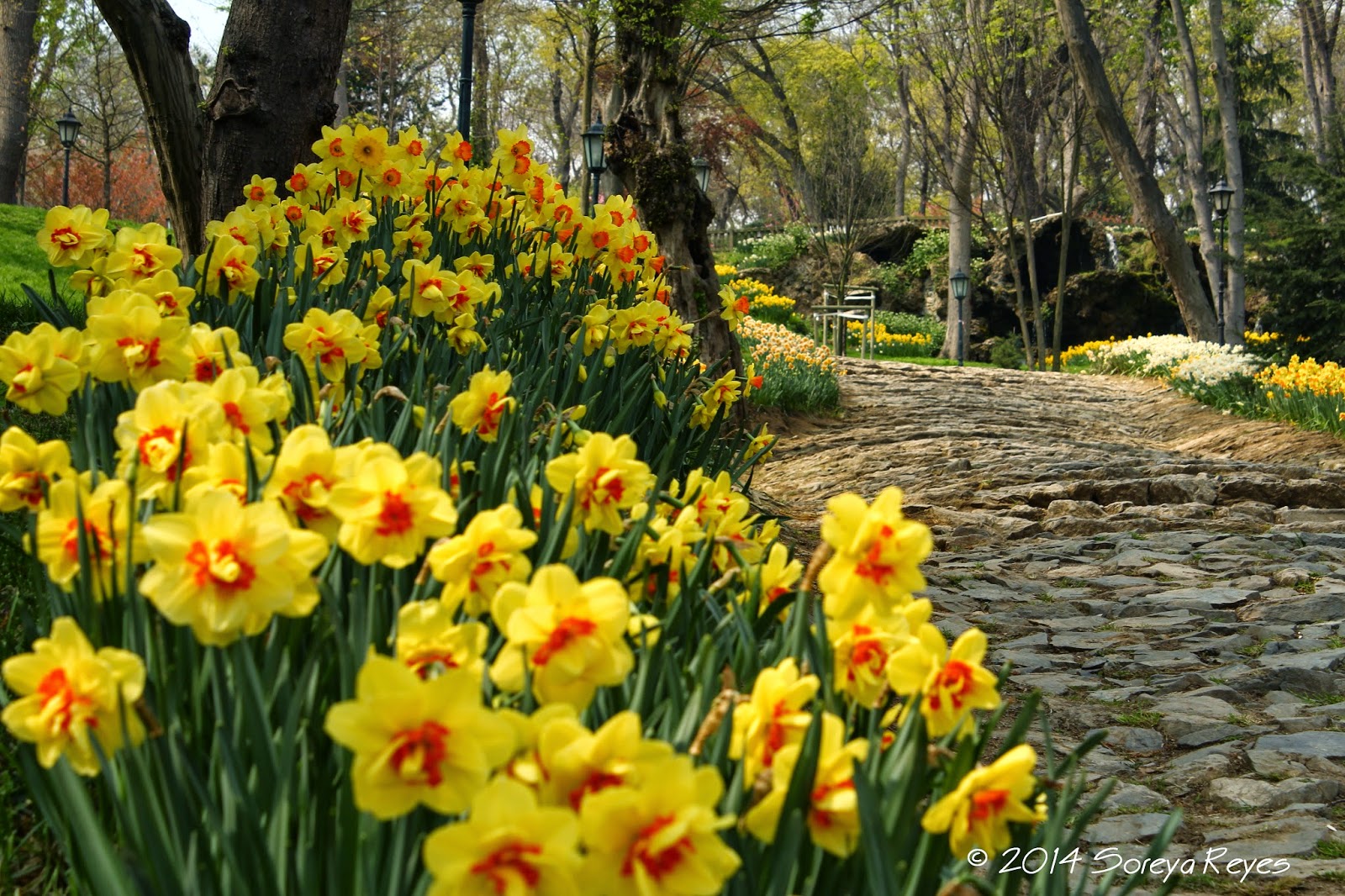 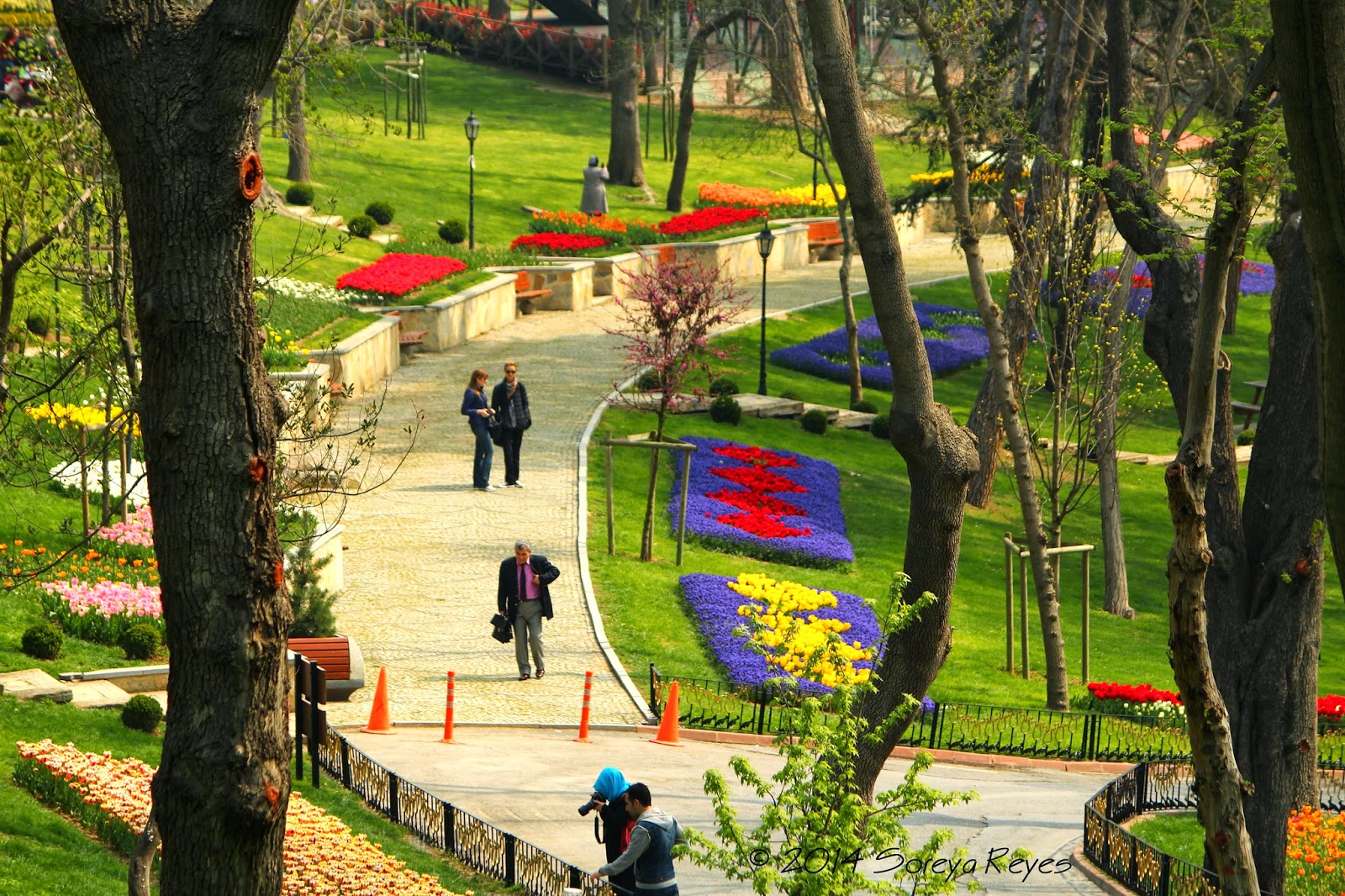 Nonetheless the Tulips remains a Turkish treasure and they are honor today by the city of İstanbul thru the beautiful Lale Festival. Enjoy the views!